Spanning a career of more than 40 years in the concert industry, Atamian introduced audiences to a brand of pianism combining brazened individualism and seraphic poetry with undeniable visceral excitement.

As a 1st prize winner in the 50th Anniversary Naumburg Competitions at Carnegie Hall in 1975, Atamian was not afraid to embrace real ideas or the controversies surrounding true expression. He saw art as revolution against convention and the artist as spokesperson for a higher source of understanding.  He challenged the form of music itself.

His RCA Red Seal recording of the solo piano transcription of Stravinsky’s seminal The Rite of Spring became a landmark and path-breaking recording ushering in the new digital age and changing the perception of transcriptions forever! Alan Ulrich, dean of critics at the San Francisco Chronicle remarked in 2000 after the Delos CD re-release of the original RCA Red Seal recording : “Twenty years later, these remain 31 of the most exciting minutes of piano playing ever recorded.”  Atamian made the transcription sound as if it (The Rite of Spring) was originally written for the piano. 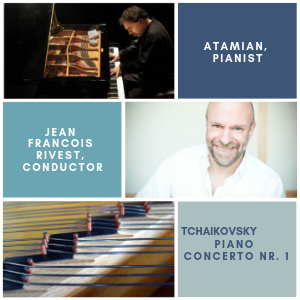 Prepare to be electrified and hear this piece like never before.

Sparks fly in this extraordinary meeting of musical minds and hearts.