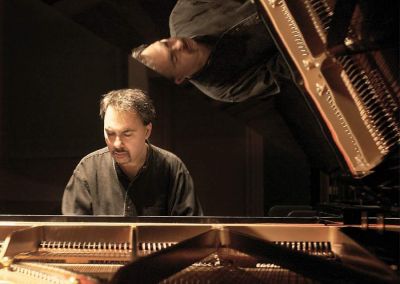 Atamian’s career evolved from a highly-excitable young artist into the maturity of a statesman of the instrument where a prodigious technical prowess was fused with rare musical acumen to deliver electrifying performances and landmark recordings.

In 1975, Atamian won 1st prize at the 50th Anniverary Naumburg Competitions at Carnegie Hall at the age of 19 – the youngest person along with William Kapell and Robert Mann, ever to win that competition. For most artists, a win at an international level competition changes their career; for Atamian it changed the music industry. The subsequent Carnegie Hall recital that followed featured a new solo piano transcription of Stravinsky’s The Rite of Spring by New York composer Sam Raphling. This daring new work for the piano was met with such universal critical acclaim that RCA Red Seal immediately signed Atamian to record the new transcription and a host of other works for their first digital release. Recently re-released on Delos, noted music critic Allan Ulrich writing for the San Francisco Examiner proclaimed: “Twenty years later, these remain 31 of the most exciting minutes of piano playing ever recorded.”  He incidentally performed the only triple world-premiere [Carnegie Hall, RCA and PBS] in musical history of any major musical cornerstone 20th century piano work.

A tour of the Soviet Union and a series of nationally televised PBS specials followed including “An Evening with  Atamian” which won ”Best of PBS” in 1981 and “Atamian Salutes Kapell”. (Both specials are available on YouTube.) William Kapell’s venerable career and tragic death inspired Atamian throughout much of his own tumultuous career. He included Kapell’s signature concerto, the Khachaturian Piano concerto in his repertoire and recorded the work with the Seattle Symphony.

With a major competition win, a landmark recording, and a tour of the Soviet Union, Atamian quickly established himself as a force to reckon with  in the piano world performing nearly 200 concerts with orchestras including performances with the Cleveland Orchestra under Lorin Maazel, the Detroit Symphony, the New York Philharmonic, the Boston Pops, the Phoenix Symphony, the Seattle Symphony, major orchestras in Poland, Russia, Mexico, and South Korea, and orchestra tours with the Royal Philharmonic Orchestra. He worked with some of the leading conductors in the industry including Gerard Schwarz, Erich Leinsdorf, Eduardo Mata, David Zinman, Sergio Comissiona, James DePreist, Gustav Meier, Victor Allessandro, Verner Torkanowsky, Jens Nygaard, Alan Hovanhess, Grzegorz Nowak, Enrique Batiz, Michael Morgan, and Joann Faletta.

Adding to the list of orchestral appearances, Atamian performed on many leading recital series in the world’s great music capitols, among them Lincoln Center’s Avery Fisher Hall and Alice Tully Hall, the 92nd Street Y, Town Hall, Carnegie Hall in New York, Orchestra Hall in Chicago, the Kennedy Center and the Library of Congress in Washington, D.C., the Academy of Music in Philadelphia, Symphony Hall in Boston, Grady Gammage Auditorium in Phoenix, Salle Gaveau in Paris, Bellas Artes in Mexico City, Victoria Hall in Geneva, Town Hall in Sidney and the Great Hall in Moscow. He has also performed at the Aspen, Marlboro, Chautauqua and Ravinia festivals.

His other recordings include the Prokofiev Third and Khachaturian Piano Concertos with Gerard Schwarz and the Seattle Symphony on Delos, CDs of the Mussorgsky Pictures at an Exhibition, selective works of Chopin and four Beethoven Sonatas.

Atamian has emerged as manager Atamian and in that role he is known under the trade name Jack Price who is the founder of Price Attractions, a concert management headquartered in Tulsa, Oklahoma with affiliates in several cities. Atamian lives there where he is actively engaged in the careers of the artists he now represents and in the lives of his two children, Sean and Annarose.